I’ve always loved learning about other people, cultures, and times. When I arrive in a new place I usually take a few days to sit back, wander, and observe how things get done. How neighbors interact. How the rhythm of the place ebbs and flows throughout the day.

Knowing this, I find myself staring out my plane window, wondering why then I would be so fascinated by the one continent where people don’t live (save a few dedicated scientists that brave the long, dark winters).

This is my second trip to the frozen continent, and I think I am even more excited than my first time here. Perhaps because I have a better idea of what to expect this time around, which gives me a new opportunity to dig deeper and to look more closely at details I missed before. Perhaps because I never imagined making it here once, much less twice, and in some small way, twice gives you a special kind of micro-ownership over of place.

No longer will it be just a place I visited for a few days. I will be able to say that Antarctica is a place I have spent over a month, working, standing on its glaciers, and sailing through its waters. I will be able to join the small group of people that have just begun to know and love this place. The group of people that considered this uninhabited land home, for however brief the moment was. 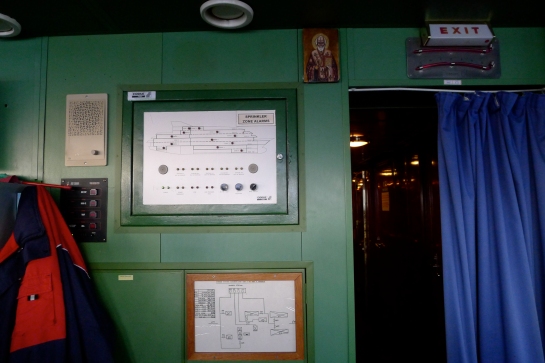 I marvel at the giant Albatrosses gliding on the breeze behind the boat, all the while looking so peaceful and weightless. I think about true sailors and wonder how they can do it. So much time on something so fickle would be enough to drive me mad.

If you have never been to Ushuaia, then learning that it lies in the Tierra del Fuego might conjure up images of a hot, tropical paradise. But, while Buenos Aires has the sweaty, sticky, Latin heat, the “Land of Fire” at Argentina’s southern tip has a rough, cold, and slightly unwelcoming facade.

Standing on the edge of the Beagle Channel, basking in the never ending sunlight that makes the late Spring 50 degree weather feel so inviting, the town glistens with color and warmth. But the cold breeze and snow covered rocky mountains that surround the town have me wondering how people could have eked a living out of this harsh ground before the cruise ships moved in.

People have lived in this area for thousands of years. The name “Tierra del Fuego” comes from Spaniards first trip to the area in 1520, during which they were greeted by fires in the mountains. Magellan believed these were lit by the indigenous Yaghan Indians waiting in the hills to ambush his crew.

Today those fires are replaced with the flashing bulbs that line the Casino’s front door. Corrugated metal buildings that lined the streets when I was here just 5 years ago, are now side by side with a 5 star hotel and several huge outerwear stores that could make some R.E.I. establishments look under stocked.

It is a strange place, this land of fire at the end of the world. It is a place so warm and inviting but so cold and foreboding, so removed from everything and yet lit up right in the middle of the wave of people reaching out towards the last new world. 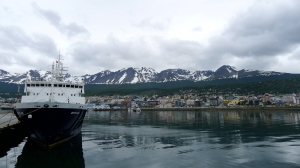 Being back in the US, I seem to have found myself in a myriad of conversations about the nature of what it means to be American, US foreign policy, and whether we should become more isolationists. I struggle with these debates because I can see where the isolationist argument comes from, but it is so far from my own views on what makes life fulfilling that is hard for me to comprehend.

Recently, after a number of these conversations, I was at a conference. Paul Farmer was giving the keynote speech and he said something that perfectly summed it up for me. “There is no ‘us and them’. Just ‘us’.”

It was such a simple statement and yet it summed up so much of what is wrong with the current debate in the United States. We tend to put everything in the context of us vs. them. But who is “us” anyway?

Take a trip from New York, to Minnesota, to L.A., to Louisiana. Really pay attention and you’ll see just as much difference as you would if you flew from Paris, to Libya, to Rwanda, to Nepal. You would see people of every color, hear just as many varying dialects and languages, and encounter just as many religions. (In actuality, I’d put money on the fact that a Parisian would be more comfortable in Rwanda than a New Yorker in the Deep South.)

Ask anyone, anywhere, what are the most basic things they want in life, and I bet whether they’re Palestinian, American, or African, you’ll hear the following: access to food and health, a safe place for their family, and dignified work.

I have always loved the Northern Neck of Virginia. As a child, visiting that part of the state was like taking a step back in time.

My father’s side of the family had settled there in the 17th century, making it a place full of romance and mystery for me. We always seemed to visit on hot summer days. My great aunt (we called her Auntie) still lived in the old family house and always seemed to be dressed for church with stockings and a dress; her white hair pulled back in a perfectly set chignon or french twist.

My Dad would take us kids over to play with the horses (the farm used to have an old racetrack which has since turned into a strip mall), to splash in the pond (made when they needed new bricks to rebuild the burnt down house in 1836 – it is now covered by a road), and to the Dairy Queen on the corner for a vanilla cone dipped in chocolate (that at least is still there).

It was another one of those familiar hot days when we were visiting. This time not to the old family house, which had been sold when I was a teenager because my grandparents could not afford to pay the inheritance tax on the farm when my great aunt died, but to a resort close by and nestled into one of the small creeks that give the area its salt water charm. Biking around we stopped for lunch at a little cafe in Irvington, The Local. I wandered to the back to get some cream for my coffee. Suddenly I was in this place that was so familiar and so like home to me, and yet was taken back to another place that I love, but that is so far away and so different.

The sign above was posted at the coffee bar. I read it and chuckled, instantly transported back to a time when sugar was salt, and my Indian waiter could do nothing but shrug and pretend that he understood my complaint. If only he had known! He could have put me in my place and with a simple shake of his head explained, “Aguni madame. It’s only for the discerning gourmet.” I smiled, reached over and dropped a small spoonful into my cup. As I slowly stirred, I thought, “Things change. Maybe salty coffee is an acquired taste.”

Throughout everyplace I went in Africa and several places in India, a common request from the small kids is “school pens! school pens!” Some legitimately need them, and some don’t. But they ask anyways because a lot of times the plea works.

I, however, never parted with a pen. I only had four and one mechanical pencil with me for the year, and, given the difficulty or near impossibility of replacing them in many places, I coveted these as if they were priceless.

But of course the plea works when there are superfluous pens to be had. With so much poverty, there is a lot of hope wrapped up in giving away a pen. Giving away something so utilitarian and yet at the same time so trivial but which signifies so much opportunity seems less like charity than just handing someone a crumpled bill or a few coins. Even I tend to keep a piece of fruit in my bag while traveling, just in case.

But now, months later I find myself in a new dilemma. I am the unemployed one with no disposable income, in the middle of a busy city, and I am suddenly in dire need of a pen. Since I am not ready to start asking people on the street for one, into Staples I go. My objective is clear: find a pen and don’t spend more than a dollar. Anything more than that is a waste as I have my four pens tucked away in a bookbag an hour’s subway ride away.

I scour the aisles, looking and looking for one inexpensive pen. After 15 futile minutes I come up with a box of 20 pens because it is the cheapest option. Cheaper to buy 20 then just one packaged up all alone.

20 pens! I only need one but I now have 20 pens because, more important than worrying about how those other 19 pens are going to go to waste, I need my dollars in my wallet. One whole year with no pens to give away and now I find myself in a place where I could stand on the street all day trying to give away my box of pens one at a time with no one wanting to take one. Because who in central Manhattan needs something as trivial and utilitarian as a pen?

Note: All material on this website is property of Renee Lamb. Feel free to forward, tweet, or share any pieces that inspire you, just make sure to give credit to yours truly.
wanderfull365
Blog at WordPress.com.
Loading Comments...