A must do in Dakar is the Ile de Goree – a small, romantically crumbling island off the coast that is eerily charming considering its dark history. For hundreds of years this was a shipping point for the African slave trade in Western Africa. Africans would be brought from the interior to this island to be packed up and shipped off to the West as if they were salted fish or peanuts. An amazing percentage, as much as 50% (according to the island museum) of the people captured as slaves never made it to the auction blocks in West.

A part of my own family owned and used slaves before the American Civil War. Knowing this fact made me strangely apprehensive as I stepped off the boat and onto the island. It was as if I thought the people here would be able to sense my family’s history in the air around me.  As if I thought they might hold me responsible for something in a past that I am connected to but took no part in. What I didn’t realize is that the day had something else in store for me, something even more interesting than a discussion about family pasts. 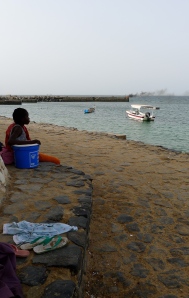 A fire burning off the end of a pier as we wait for the ferry to arrive.

The day was wrapping up and we decided to walk back to pier to see about the 4.30pm ferryboat. Several friends in Dakar had commented on the precision and efficiency of the ferry system, so when we arrived at the pier and there was no boat, our assumption was that the boat had been early. As we sat along the beach, 6pm turned to 7pm and three supposed ferry times had passed. Masses of people were in the water swimming and a similar masses were piling onto the two piers to start bonfires of palm leaves and plastic chairs – “an offering for rain,” as it was described to me by a young lady selling jewelry. “Hmm,” I thought, “civil discontent turning into acid rain perhaps.”

Finally a little before 8pm, a boat appeared on the horizon. Hysteria ensued as the hundreds of people saw this as their only opportunity to get back to Dakar. The gates to the small pier were pushed open and people ran out to boat as if the history of this island made it an impossible place to pass the night.

So many people were pouring onto the pier that those on the boat had no way to get off. The small wobbly railings lining the pier shook and bent under the pressure of so many people. The pushing, shoving, and screaming were so intense that they could only be broken by the sudden burning sensation of pepper spray in the air. Everyone ran towards the beach and stones began flying through the air. We backed up behind the stone throwers, covered our faces with whatever we had, and watched the chaos unfold.

Now night and the overcrowded ferry gone, we sat again by beach wondering if we would be staying until tomorrow. I called my friend in Dakar to let her know we might not be back. As I described the scene, she was shocked. “I have never heard of that happening on Goree,” she said. “It is usually so quiet and calm.” I guess I have a way of bringing out the best in places.