I’ve concluded that the most intimidating sounding places are actually the most likely to have amazing camping with beautiful sunsets, a bright Milky Way, and millions of stars. Plus, it just sounds kind of cool to say, “I slept in Death Valley and lived to tell about it”. 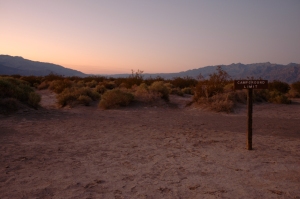 point in the North America (Badwater Basin at -282 ft below sea level) and average summer temperatures of 120 degrees in the shade. The summer is so hot that the park’s lower campgrounds don’t even open until mid October.

We rolled into the valley shortly after the camping season opened. Passing a tent-only campground, still completely empty, we eventually ended up at the larger RV/tent campsite. To picture the campground, you’d have to imagine a large unpaved parking lot with only four RV’s (one of which was flanked by three 20 something guys watching the sunset while sitting topless in their folding chairs). Luckily, the tent sites were at the back where you could walk 20 yards into the small dunes and bushes and completely forget that any other living thing was around.

Above Death Valley, the air space is used by the Air Force and Navy for flight trainings. Once the sun went down, that translated into flashing lights amongst the stars making perfect 90 degree turns, sudden stops, and what appeared to be impossible forward and backward movements. It’s no wonder UFO sighting are rampant in this part of the country. In the morning while hiking in a slot canyon lined with marble walls as smooth as the floor of Saint Peter’s Basilica, two sparring fighter jets flew overhead, twirling and jolting, seemingly trying to come down and land on the canyon walls. The whole canyon was ringing with the sound of their jet engines. If “Top Gun” is your favorite movie, put Death Valley on your list of must sees.

Note: All material on this website is property of Renee Lamb. Feel free to forward, tweet, or share any pieces that inspire you, just make sure to give credit to yours truly.