First, let me say that yes, I am back in Goa. We were only supposed to be back for a quick weekend to see friends, but we quickly became held hostage in Goa by Indian Railways.

In the week that we’ve been here, we have attempted

to purchase train tickets north from multiple entities in three different towns. Only today have we finally succeeded (with a 2 hour taxi ride, a hurried Xerox exchange, and much elbowing through the lines at the Margao train station – at one point I actually thought my husband might be trampled alive by the dozen Indian men behind him in the, at that moment closed, “Foreign Tourist” line) to purchase an “emergency” ticket for 2 days from now. Geez.

To fill the next 48 hours we decided to stay somewhere out of the hubbub of Margao but still within an easy 10 minute taxi ride – looking at the map, we picked Benaulim Beach. My guidebook called this beach “quiet”, and yes, at 4pm when we showed up it felt relatively empty. A late lunch and short walk later and it was 6pm and people seemed to be coming out of the woodwork. The place was packed. We barely found a spot to sit down. To our right were several paragliders, to our left an impromptu male model shoot, and all around families, couples, and gaggles of friends swimming and talking. I even saw THREE Indian ladies swimming, for fun, each with their significant other. (I have to note that for others this may seem a small thing to note, but for me it was amazing. In all my time here, I have seen plenty of Indian families at the beach. The men always in their boxers splashing around in the water, and the women fully dressed in sari or salwar kameez, just sitting on the beach or timidly sticking their toes in the edge of the surf. That three women of varying ages would be fully immersed in the water for no reason other than their own pleasure, was unusual enough that both I and my husband noted it independently.) 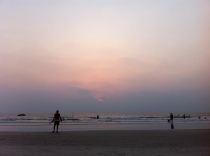 This sunset was unlike any other I have experienced here. It felt like we had suddenly entered a party where we didn’t know anyone and could just be flies on the wall. We had stopped to watch the sunset, but the people watching was so intriguing, I didn’t even notice when the sun went down. We have one last night in Goa before we head north to Gujarat. I know where I’ll be for sunset tomorrow.

Note: All material on this website is property of Renee Lamb. Feel free to forward, tweet, or share any pieces that inspire you, just make sure to give credit to yours truly.